Overview: In a democracy power is obtained via competition. Yet, as women gain access to parliaments in record numbers worldwide collaboration appears to be on the rise. This is puzzling: Why, if politicians can secure power via competition, would we ever observe collaboration? Using evidence from 200 interviews with political elites from 19 Argentine provinces, a novel dataset from 23 Argentine chambers over 18 years, and qualitative case studies from across the world, I reexamine traditional notions of competitive democracy by evaluating patterns of collaboration among legislators. In doing so, I tackle three important questions.
My first question is: Can democracy be collaborative? I argue that collaborative democracy is not antithetical to competitive democracy. While only the bare majority can secure the power to decide via competition, I explain that all legislators—particularly those who do not have power—can influence the policy-making process through collaboration. Using bill cosponsorship data, which represents the culmination of the collaborative process, I demonstrate that democracy can be collaborative, that out-of-power legislators collaborate more frequently than those in power, and that women collaborate more than men.

This raises a second question: Why are female legislators more inclined to collaborate than their male colleagues? I explain that women collaborate more than men because they face structural barriers that restrict their ability to exert influence on the policy-making process. By collaborating with other women they can overcome structural barriers and attain political power. I show empirically that despite having high levels of descriptive representation as a group and seniority as individuals, women’s marginalization exists across a vast array of legislative power including legislative leadership posts, committee leadership posts, and powerful committee appointments. This marginalization limits women’s political power and motivates collaboration among women.

Finally, this leads to my third question; if women are more collaborative, why do some female legislators collaborate successfully among themselves, while other women fail to do so? Specifically, I tackle the question: When do women collaborate? I argue that despite the benefits of collaboration, patterns of collaboration vary among female legislators because not all women have the same opportunities to work cooperatively. Different legislative contexts either facilitate or constrain women’s collaboration. I show empirically that six key contextual variables that vary both across and within legislative chambers shape policy collaboration. First, I examine women’s numeric representation and partisan pressures; both factors vary largely across legislative chambers. Then I focus on affiliation with the executive party, seniority, legislation targeting women’s issues, and membership in a women’s caucus or committee; each of these factors vary within legislative chambers. Taken together, the answers to these three important questions, contribute to our understanding of democracy by explaining why and when we can expect to observe collaboration in a democracy where power is obtained via competition.

This book uses a rich combination of both qualitative and quantitative data to support my central argument. The primary case analyzed is Argentina, where I compare women’s legislative behavior at the provincial level in order to capture variation in institutional contexts within a single case. As the first country to adopt legislative gender quotas, Argentina is one of the only contexts in the world where women have held a sizable share of seats in the legislature over a long timeline in a large number of chambers. Gender quotas were first adopted in Argentina at the national level in 1991. The following year, quota adoption began to spread rapidly across the provincial legislatures. The figure below charts the adoption of gender quotas across the Argentine provinces.

I draw on qualitative evidence from over 200 interviews with male and female legislators and elite political observers from 19 Argentine provinces. The fieldwork was conducted between 2007 and 2013 during six different trips to Argentina. My quantitative evidence comes from a novel dataset that I developed using archival data from 23 Argentine chambers over an 18-year period. The data includes all cosponsored legislation, committee appointments, and leadership posts for over 7,000 male and female legislators.

I augment my careful analysis of Argentina with a series of qualitative case studies that examine women’s legislative collaboration. This approach, which draws on examples from across the world, allows me to demonstrate the generalizability of the relationships observed in Argentina. Here I can account for more informal types of collaboration that occur in the policy-making process and extend my analysis to other legislative contexts. The depth provided by the Argentine analyses—coupled with the breadth offered by these additional case studies—makes this book the most comprehensive study of collaboration to date. 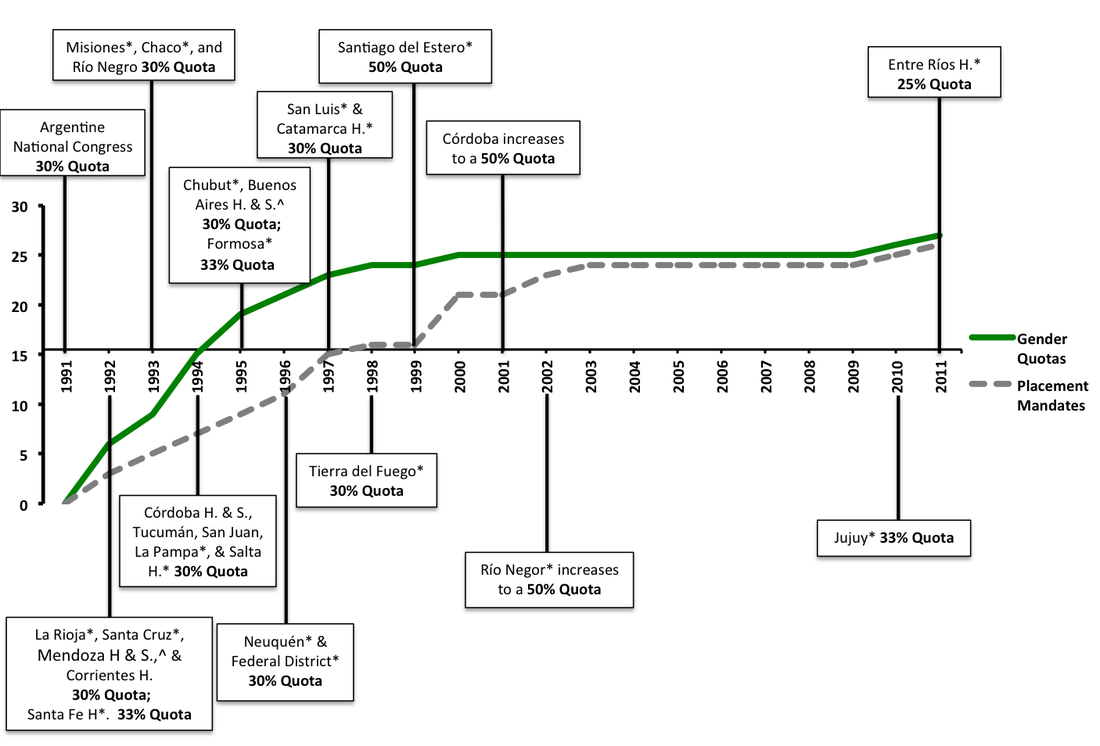